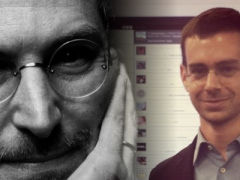 Anyone that knows me knows the admiration that I have for Steve Jobs and for the longest time I believed that we were mere puppets in a world controlled by the number 1 visionary of all time. So I was more than a little amused by the recent blog post, Thoughts on Jack Dorsey, by Steve Jobs, claiming Jack Dorsey is trying to take Steve Jobs identity instead of being true to himself.

Truth be told though, I’ve developed a bit of a soft spot for Jack Dorsey over the last year and a bit and I don’t think the post is overly fair to him. In a time where the Steve Jobs biography is sitting on most office shelves and many managers are wondering how to emulate his successes, it makes sense that the world is looking for a successor of sorts and focusing on one person that seems to be getting it right.

While little is known about the man that is fast rising to the number 2 spot on my list of awe-inspiring individuals, this Vanity Fair article does provide some insight into what maketh the man. As with Steve, Jack  has drawn a lot of inspiration from the world around him, his experiences and passions to develop some game-changing technologies and this is most definitely necessary if one was to change the world. The Vanity Fair article discusses how some of these passions started early in life, long before Jack could envisage the impact that he would have on the world. It looks at how Jack took the path less travelled, dabbling in botanical illustration, massage therapy and fashion before his love of dispatch systems gave rise to Twitter. One of the similarities discussed in the “Steve Jobs” blog is how Jack felt when ousted from Twitter which I think is an expression most people would use if put in that situation but Jack proved not to be a one hit wonder with Square and making a come back of note.

It is only such intensity and drive shared by these two individuals that is capable of changing the world and I’m pretty sure such a commitment leaves Jack with little time to think of how to be Steve Jobs. For now, this is Jack Dorsey’s world and we just inhabit it.